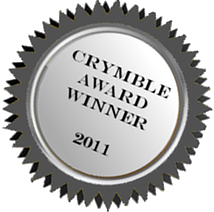 It's the last day of the year and I thought it'd be fitting to write briefly about the research and projects published this calendar year that's had the most impact on my personal scholarly development. With all the talk of research impact these days, particularly in the UK, I think it's important to acknowledge that not all influential work gets cited. Much of it inspires our own research indirectly by introducing us to new techniques, ideas, or source materials. Here is my own list of my favourites for 2011 in no particular order. I've dubbed these awards the "Crymble Awards", so fee free to put that on your CVs. Unfortunately, that's the only prize. But as my grade 1 teacher always said, "everyone likes a warm fuzzy".


Congratulations to all of our winners. And thanks for the great work. It's inspired me, even though none of your work had been peer reviewed.
Posted by Adam Crymble at 5:19 AM

Thanks, Adam! I'm honoured to win a Crymble this year. Do you have a jpeg award badge I could add to the Nature's Past page?

With some touch of digital history it would probably help students regarding all those concerns and probabilities which are indeed said to be important. create your own timeline