I am always disheartened when I hear from people that history is boring. History is not boring, it’s an adventure through imagination that the literary, television and film worlds have all realized and taken advantage of. Every cartoon with princesses and dragons is really just a play on medieval history, as are fantasy novels such as Lord of the Rings and even Harry Potter. It’s our desire to go to a world that doesn’t exist but in our imaginations that makes both fantasy and history so exciting for people.

And that’s why I’m so disheartened when I hear from people that history is boring. What they’re really saying is that we’re not telling them a good story. We’re not involving them. Unfortunately, in many cases, the hands-on involvement that places like the Ontario Science Centre are famous for with their scientific marvels and gizmos is just not possible in traditional history museums. You can’t have twenty thousand people playing with rare artifacts and expect no damage to come to the items. 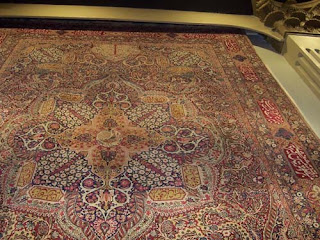 Give me a button to press, or an over-the-top actor wandering around creating atmosphere. Give me gadgets to play with. I don’t want to see a rug that Charles I once walked on; I want to see his head fly off as the executioners axe comes down and get splattered with fake blood. Don’t give me text-panels, give me activities. But most of all, tell me a story. Because that’s what history is. A story. Our story.

And we shouldn’t expect people to memorize our story. Instead, we should make it something worth listening to; worth participating in.

Why does the mission statement of the Ontario Science Centre say it aims first and foremost “to delight” whereas the seeks to “be a world leader in communicating its research and collections”?

Delight me!
Posted by Adam Crymble at 6:58 PM

I would have to say I agree and disagree with your idea. The idea of delighting an audience is great and I am sure lots of bored children and adults want more 'button and blood' experiences. Personally, I believe there should be a spectrum. There should be a place for the traditional (stuffy/rigid/hands-off) presentation of history, as well as the 'wow' factor type. We need to continue to preserve the past, as well as celebrate and engage with it!

Do you want the audience to embrace/mingle with authentic artifacts? Would you settle for replicas?

Keep up the blogging - it's always an attention-grabbing read.

I have to say when it comes to authentic artifacts, I'd rather the kids kept their destructive little hands off them; I'm all-for a room set up with replicas. Very few people would know the difference anyway and most children would get far more out of touching and trying than looking.

Those are the possible ideas and would favorably assist students regarding all those details which must have been followed by the individuals to proceed herein. cardiology fellowship personal statement

There are different of the museums in the world from where you can find the science and the technology from this pattern. Make your best life from this section of the science and can work for dental residency personal statement you can introduce your own work.

Glad to know this information.

In this article, you have provided some possible ideas which are very helpful in science. There is a different museum in the world. So you can visit the site to get new ideas and techniques.

If they make more museum by using science then it will be so much helpful for the next generation to know about science by visiting these museum. visit the site if want to know more about the writing of your academic papers, research papers and thesis editing.

I mean museum have more importance in our learning time. So you said correctly that we need to make this so more scientifiq. Students can learn something from psychiatry personal statement services. I think they are do well job in here.

Museum is one of the important place to archive lots of knowledge about past history. Some people or students think that museum is a boring place, but if we can decorate our museum with scientifically then it should be enjoyable everything for residency and great learning place for all people. Thanks for sharing very important fact.