I was recently out west in and while I was there I went and visited the located on the campus of the . The museum is most famous for its west coast native art, including large totem poles and wood carvings done by west coast native groups. The art is truly beautiful and impressive, however it was the access to the collection that I found astounding. The curators had realized that the amount of space required to put everything out in the open was well beyond what they had. So, they developed what they call “Visible Storage” units, which allow visitors to inspect over 13 000 artifacts at will. Almost half of their massive collection of artifacts is accessible through this system.

The museum also contains traditional displays of well-lit pieces out in the open, or in display cases, however most of the smaller artifacts are at first invisible to the eye. That’s because they are in the “Visible Storage.” These “Visible Storage” units are essen 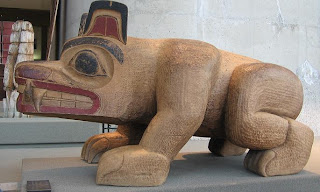 tially a series of chests with sliding drawers. In each drawer is a collection of artifacts of similar provenance. One drawer might contain pipes used by the Kwakwaka'wakw people, another, shoes worn by the Haida. Unlike so many museums I have been to in the past, the was packed with these treasure chests, which lined many of the walls. Each was sheltered from careless visitors by a protective sheet of plexi-glass, and visitors are encouraged to look at as much or as little as they desire.

My girlfriend and I chose which drawers to open based on how unlikely we thought it was that the average person would choose that drawer. We looked at quite a few of the drawers close to the floor, in an attempt to get a less traveled tour of the collection. As a researcher, I don’t think I could have asked for more in terms of accessibility. The concept of open stacks so familiar to goers of libraries has been brought into the world of material culture by this museum. An open stack archive, that both protects and provides the option of browsing.

I have become accustomed to expecting upwards of 90% of a museum collection to be hidden in some underground vault, for lack of display space. It was so refreshing to see it all out there at the . The museum was promoting research of its collection by making it accessible. It was peaking curiosity by tempting me to open various drawers to see what was inside – not unlike a kid at Christmas, and it was allowing me, the visitor to decide how much I wanted to see during my visit.

Kudos to the for such a great idea.

Artwork is by Bill Reid. Photograph by Adam Crymble.

That sounds really cool - especially that you can get so close to the objects. I was at the Auckland Museum and get this - I didn't get to see the final reno but they are building a glass wall along one side of the collections storage room. You are going to be able to actually take a good look into the behind-the-scenes. Pretty cool stuff!!!