I've essentially gone paperless over the past year. No longer do I print off articles to read; especially if they're available on the internet. 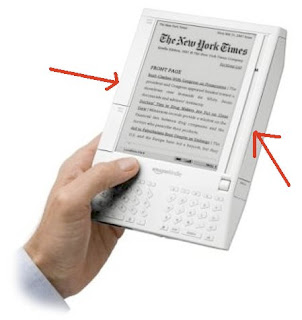 However, I've always hated the way most websites with articles on them are set up - especially sites that scan in images of journal articles or old books such as Jstor or Early English Books Online. More often then not, users are forced to click a tiny little "next" button at the bottom of the page. Call me fussy, but the 1/18th of a second it takes me to move my mouse to that itsy bitsy button makes me hate using these sites. It's even worse when the next page loads and to find the button, I have to scroll my screen down. Set-ups like that just reinforce the complaints of the book-lovers who would rather trudge into the library and use a hard-copy than use the online databases.

Amazon's new electronic book-reader, Kindle came up with a rather novel way of dealing with the fact that most readers like to quickly turn the page, rather than click a little button. The Kindle has two large buttons that run the length of the 'page'. The one on the left, predictably takes the reader to the previous page, the one on the right goes to the next page. Not only are the buttons placed where the readers thumb will likely anyways be - to avoid any effort on the reader's part at all - but they're the best way I've yet seen of a simulated page turn using an electronic device. 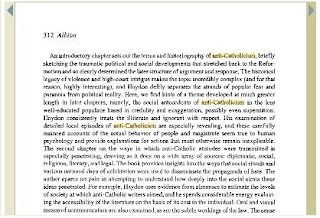 Apparently, the people at Jstor took notice. The scrawny little next buttons and clumsy navigation are gone and instead, large Kindle-like buttons appear on every page. They're the tan-coloured bands in the image. Rather than having to scroll around looking for the button, I can see it no matter where I am. Sure, the change probably hasn't saved me that much time - in fact, they've so far cost me the time it's taken to write this post - but they've made the interface that much more user-friendly.

I'm sure in a few years everyone will be on board and this style of navigation will be the norm. But for now, it's a nice step in the right direction.
Posted by Adam Crymble at 11:18 AM