Where are the Digital Humanists?

This year has brought a lot of discussion about just what the digital humanities are. Self-described digital humanists have blogged on what they think makes a digital humanist and what doesn't. As with all definitions of identity, everyone has a slightly different opinion.

I won't rehash those discussions here. Instead, what I'd like to do is ask where the digital humanities are by looking at the participants of two major crowd-sourced activities from the past 12 months: the Day in the Life of the Digital Humanities (Day of DH) [March 18, 2011], and Hacking the Academy (Hackacad) [May 21-28, 2010]. If you are unfamiliar with these projects, a brief background will help.

Day of DH asks self-described digital humanists to blog or otherwise record their activities on March 18, 2011. The project is based at the University of Alberta in Edmonton. Participants are pre-screened before being given a blog, though it's not clear who if anyone was rejected. Selection is self-applied and because there is no physical meeeting, participation is open worldwide.

Hackacad was a crowd-sourced book written in a week. The project was initiated by the Center for History & New Media at George Mason University in Virginia. Anyone could contribute a chapter (blog post), as long as it was submitted by the end of the week. Though this was not targetted specifically at Digital Humanists (more technologically literate public historians and researchers, I think), it did attract quite a few DH-type articles. Like Day of DH, there was no requirement to physically be somewhere so it was open to participants worldwide.

Last year, I compiled data on where the Hackacad contributors were writing from. Meg Stewart compiled my data in an easy-to-read map. What I argued at the time, was that contributors were skewed towards those who lived near, or had likely met or worked with the organizers and was not truely representative of the "crowd" of possible contributors. This isn't meant to be a criticism of the organizers who pulled off an impressive feat with their crowdsource experiment. Rather, it shows us that when crowdsourcing anything, one must ask who's in the crowd and who got left out.

So to take a closer look at that, I have made some maps. The first shows where the Hackacad contributors came from, the second shows where the Day of DH contributors live, and the third shows the people who contributed to both projects. (The tags won't lead you to anyone's house; just the city in which their university or institution is located). You can view each map in Google Maps and explore the data by clicking on one of the images below. 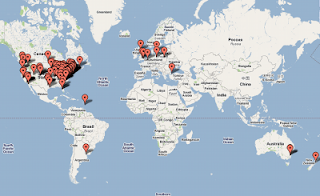 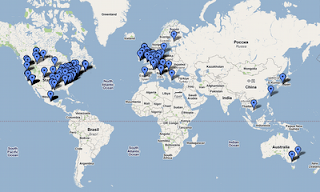 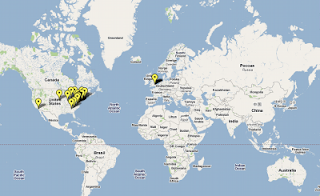 What this shows us in both cases is that the personal and professional networks of the organizers influence who participates. If one only looked at the Hackacad map, one would be forced to conclude that digital humanists - broadly defined - lived almost exclusively in the North Eastern United States. There are pockets of Digital Humanists in southern California, and a few solo scholars plugging away through much of the western world, presumably in great loneliness. As English was the language of the book, the great empty continents are perhaps not too surprising, but they are telling in terms of who belongs to this great academic discussion.

The Day of DH map tells a different story. That is: Digital Humanities is not so focused on the US. There are strong communities in Europe, the United Kingdom, Canada, and Mexico. The trickle of Asian-based DH people suggests there's obviously a lot more, but perhaps few have the command of the English language needed to participate more fully in this English-language discussion.

The third map surprised me. Only a handful of people participated in both events. Though, I did recognize most of the names from either Twitter or active blogs, suggesting that as with most things, there is a small vocal core to every community.

So where are the digital humanities?

Well, it depends. The top cities, according to Hackacad are:


According to the Day of DH:

What does this all mean? Well I think for one, it shows that in any crowdsourced activity, those close to the organizers will be overrepresented in the results. Edmonton is not - to my knowledge - a Mecca of digital scholarship, though I will say they do some fantastic work there. Instead, Edmonton is where the Day of DH exists out loud. The organizers live and work there and have almost certainly discussed the project with staff and students. This encourages participation in a way that goes outside of the crowdsource and instead is based on face to face interaction.

Overall, I think the maps, if combined, give us a good idea of where the digital humanities are. Certain areas are surely over represented (London, I think fits this category). Some are vastly under-represented (Australia & NZ). Perhaps most interesting is that the top schools in terms of reputation, according to Times Higher Education, often don't appear at all on these maps.

The top 10 schools by reputation and the number of Digital Humanists based on these two events are as follows:


It would seem that these schools havn't built their reputations on innovative humanities research!

We can also conclude that the self-identified digital humanists are primarily: urban, working in Western countries, at major research focused universities. But hey, we probably already knew that, huh?
Posted by Adam Crymble at 7:59 AM

Nicely done. I'd noticed this (apparent) correlation between institutional prestige and lack of DH mojo in the past. You can see it also, for example, in the list of schools awarded NEH ODH grants. Of course, it's not quite fair. MIT does many wonderful things in DH, Yale hosted an important DH graduate conference last year, Chicago is very active in DH activities via ARTFL and so on. The social/personal networks you mentioned and frankly also different cultural and professional attitudes to social media all play a huge role. It's something I've become a lot more aware of since I moved to Germany from the States.

There were more Digital Humanits based in Mexico in DH2011, Ernesto Priani, Alberto Martinez and Ali Albarran.

Both Ernesto Priani and Isabel Galina are shown on the DH2011 map. You may just need to zoom in farther to see.

Very interesting. I think you are right about the personal and professional networks of organizers. For the Day of DH we have tried various ways of encouraging non-English DHers to participate, but it is always using our networks.

There may be other reasons for the predominance of English countries in these events having to do with emerging disciplinary boundaries. In some countries informatics is the emergent paradigm. There is also a thread of suspicion about how the digital humanities play out in the English speaking world that we don't hear unless we read in other languages. We probably need to think about how we engage and listen to colleagues in other regions.

Lastly, I should add that the University of Alberta shows up not only because we organize the event, but because we have an MA in Humanities Computing so we have a lot of grad students and faculty who could participate.

Thank you Adam, I feel so silly! I've realised they were there, it's just that at first sight it looks so lonely... ;) cheers.