How to Get Feedback from your Exhibit Viewers Without Their Realizing it.

One of our class assignments this year was to mount a history of medicine display in the Medical Sciences building here at the University of Western Ontario, which used some of the medical artifacts from our vast collection. We mounted the exhibit, but when I left that afternoon I was skeptical that anyone would bother to look at what we had created. Personally, I never bother to look at the contents of exhibits mounted in hallways, so why should I expect the general public to be any different?

I decided to do a couple tests to see if there were inexpensive ways you could draw people to an exhibit and to get feedback on whether or not your gimmick had worked. Over the past month, I have mounted two unauthorized displays in the hall of the History department using two different interactive techniques. The case in question had been left empty all year but fortunately was unlocked, so I took the initiative to add some history to the history department.

I decided on a theme: “the History of Traditions” and created my first display. The content was unimportant since I was really just testing the interactive component, so I surfed the internet and created a few text panels and images related to the History of Wearing a Poppy as an act of 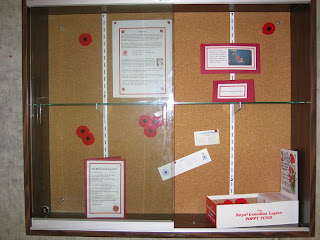 remembrance. Since the Royal Canadian Legion was in the middle of their November Poppy donation drive, I contacted them and got a donation box along with 100 poppies – one for each person I estimated would see the case, given its location deep within the history department. This was to be my interactive component.

I secretly mounted my display, leaving one of the sliding glass doors open to encourage viewers to donate or to take a poppy. For just over a week it sat there on the wall and on Remembrance Day, I took it down and counted the poppies. 34 had been taken by viewers and I had collected about ten dollars which I returned to the grateful Legionnaires. Undoubtedly some people took two and some people who read the display didn’t take one at all. However, I was able to get a rough idea of how many people were looking at what I had created, with a simple interactive component – one that most people probably never even thought of as interactive.

I wondered if it had been the poppy box that had attracted viewers who wanted a poppy that would not otherwise bothered to look at the display. In an attempt to determine if my interactive component was attracting the viewers or merely recording them, I decided to come up with something a little more gimmicky that would attract people: a voting system. Keeping with the theme of the History of Traditions, I created a display on the History of Why We Send Fruitcakes.

This time, rather than ask fo

r money, I placed a brick, a photograph of George Bush and a fruitcake on the bottom shelf of my display and numbered each item. I then posted three small sheets of paper with corresponding numbers and a bunch of stickers for people to use. I asked viewers “Can You Spot the Real Fruitcake? Indicate with a Star 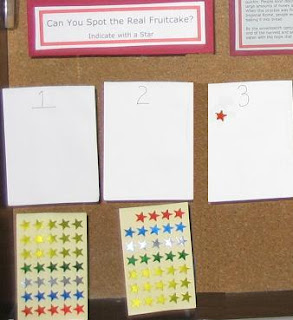 .” The interaction was merely a play on words of the various meanings people associate with the word “fruitcake” but what was important wasn’t that people could spot the true cake – most people got that wrong. What was important was that I was able to draw them in with a silly exercise and I provided myself with feedback from the viewer. The fact that people voted at all meant they were interested enough in the exercise, and that they took at least a moment to see what was in the case so they could make their choice.

The first day the exhibit was mounted, a crowd of my classmates gathered around to see what it was. The sheets quickly filled up with stars, and my colleagues asked me unknowingly, “Have you voted for the fruitcake yet?” For less than a dollar and with no gadgets, I was able to create a simple interactive component that drew in viewers and a feedback forum for myself. All while maintaining a traditional style display case that presented a history to the viewer.

The idea was popular enough that one of the other students in my class used my sticker-voting idea in a class assignment we recently completed to design an exhibit of medical history. She borrowed the idea for her own proposal as a way to get viewers involved and to get them to approach the exhibit. 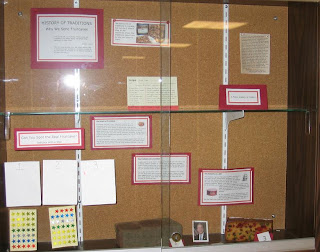 If no one objects, I’ll continue the “History of Traditions” displays in the new year, or if one of my classmates would like to create an interactive display of their own, I would be happy to cede the case. After all, I didn’t ask if I could use it anyway. But in a department with a Public History program, no display case should ever remain empty!

Thanks to the Duchess of Kent Royal Canadian Legion for trusting me with their poppies, to Corey Everrett and Aaron Day for the idea about a display on Fruitcake, and to everyone who participated in my experiment.
Posted by Adam Crymble at 11:05 AM

I love it! You have no idea how many people asked me which public history student put that up.

Adam,
While I think what you've done is great, I'm concerned. I fear that, because the fruitcake is still in the case, you are reducing the amount of fruitcakes available for circulation this coming Holiday. As we all know, there is a finite amount of fruitcakes in the world which are circulated from household to household during the holidays. What happens if little Betty doesn't get her fruitcake this Holiday. The fruit is on your hands, Adam.

I loved your display! It definitely was a source of inspiration for me. I can't believe I never suspected it was you who created the display, especially after our fruitcake conversation. Anyway...great job!