Public History on the Streets 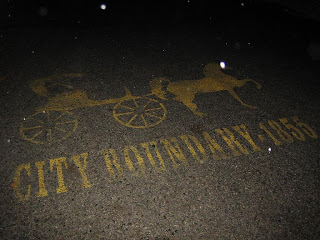 If you live here in London, Ontario, you may have noticed these. They're all over my neighbourhood and as the image suggests, they mark the city boundary as it appeared in 1855.

They are quite large (2.5m/7 feet across), and painted directly on the road. They appeared three or four years ago after the streets were repaved in the area, but I wasn't able to get a response from City Hall as to who put them there or what motivated them to. Most people probably never notice them; thousands of cars drive over them every day. But I have to say, I think they're a great idea.

They do what academic history cannot. They are so tangible. They present history at the exact point that it occurred. Even most museums cannot boast such a feat. W 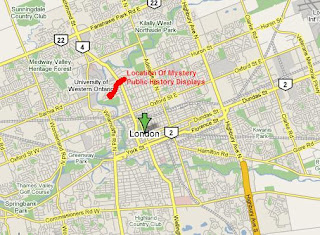 e all know that the mummy at the Royal Ontario Museum in Toronto was not an early Torontonian, he was brought there from Egypt. Yet that's where we go to experience Egyptian history.

Not so with these paintings on the road. To experience a piece of London's history, all you have to do is go stand on one of these paintings and you're at a spot historically significant in 1855. Sure, it's not as cool as the mummy, but it's cheap, noninvasive and it's simple enough that even a young child could begin learning about the history of their city by merely asking, "Mommy, what's that?"
Posted by Adam Crymble at 10:49 AM