Make Your Own 3d Graphics 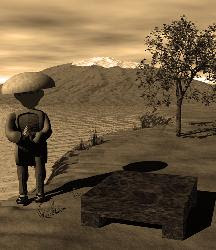 One of our major assignments this year is to create interactive content for Museum London to use with their grade 5 students, on a Smartboard. The Smartboard is a lot like a Power Point presentation that allows students to move things around and click buttons on the screen. Essentially, it's a fancy blackboard.

In designing the content, I decided to make use of a graphics program I'd learned a few years ago called Bryce 3D to spice things up a bit and make my own graphics rather than relying on those created by others. Bryce is a bit outdated now (You won't see Disney using it in any of their upcoming movies), but it still makes some pretty nice pictures - especially landscapes.

The difference between Bryce and the Paint/Draw programs we all have on our computers, is that everything in Bryce i 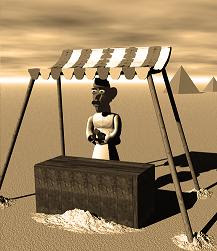 s made up of geometric shapes that not only have height and width, but depth as well. In paint, you make an orange by drawing a circle; in Bryce, you make a sphere.

And unlike in Paint/Draw, where you can only look at your picture from one point of view, in Bryce, you can walk all around your objects. From the front, side, above, below, or from any angle imaginable. This freedom (though tricky to master), allows you to create some pretty detailed pictures. And once you've tried it, I doubt you'll ever want to go back to the clunky interface of Google Sketchup.

For my project, I needed an image of three vendors. One from 19th c India, Japan and Egypt. 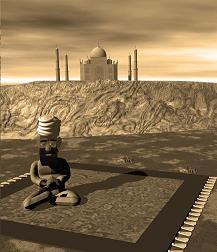 I did some quick research on the types of clothes men wore in these countries during these times, and using dozens of individual little geometric objects, and a little help from Photoshop to add the sepia tones, I was able to come up with the three you see here.

So, if you like art, or need to make some graphics of landscapes, buildings, or even objects (people are doable, but there are better programs out there), give a 3d modeling program a try. You might like it. And you might be impressed with what you can come up with.

Note: I don't work for Bryce, it just happens to be the program I'm most familiar with. If you don't want to pay for a program, you might try "Blender," which is free and open source.