Pre-Historic Park and Keepin' it Simple

I caught a program on TVO last night called “.” It originally aired on Animal Planet, and combines with Steve Irwin, the Crocodile Hunter, and adds a little time travel in for good measure.

It’s a kid’s show, but it is filmed like a nature program, where a camera crew follows around the fearless host through the wilderness. Except, rather than seeking out King Cobra’s, or Crocodiles, the host travels back in time to bring near-extinct species such as the Microraptor or the Triceratops, into the present where they are kept at “Prehistoric Park” in what amounts to a Dino-zoo. Computer graphics bring the beasts back to life, and if you suspend your disbelief, you can easily imagine that he’s actually there.

But, what I found the most intriguing, was the way in which information was presented to the audience. I’m no paleontologist, but I’m pretty sure the level of detail given by the narrator is at best theory. Last night, for instance, he caught four Microraptors, which were “half-bird, half-dinosaur.” These Microraptors had a few feathers, which according to the host, were used to keep the animal warm, as well as for use in elaborate courtship displays such as those performed by modern Birds of Paradise.

This information was presented plainly, factually and not unlike you’d expect from Steve Irwin explaining crocodile behaviour. But, the difference is, Microraptors have never been seen alive by humans. Not even close. All we have are some impressions in rocks and perhaps some fossils. There’s no way we could conclusively know this level of detail about the Microraptor’s courtship rituals. Steve Irwin, on the other hand, spent a lifetime studying crocodiles, and was able to see first-hand how they react to various stimuli.

Does this program lie? 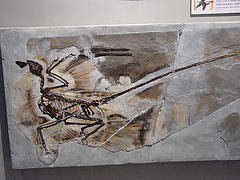 We, as viewers, know that the dinosaurs aren’t real (even though the graphics are pretty good). We also know he isn’t really time-traveling. So, are they merely trying to entertain us with some graphics, and some dramatic scenes in which the host routinely almost doesn’t make it back alive? Or are they trying to teach us about these creatures in an intriguing and innovative way?

I’m more inclined to say it’s the later. The content is important.

But, evidently – at least for the producers – the fact that the information presented are theories and not 100% for-sure truths is unimportant. Certainly, we cannot expect children watching this show to understand this distinction between academic theory and certitude. Even most adults probably wouldn’t pick up on the distinction.

But, does it matter?

Is the purpose of shows like these, or even of paleontologists, to brief the world on the latest research and theories? Or, is it to broadly educate those interested in some part of paleontology that they might never have known before, and to do it in an exciting and entertaining way?

There’s something to be said about simplicity.