Colonial Williamsburg has brought one small town in southern Virginia back to 1775. According to the man out front of the cobbler's shop on the main street, this living history museum employs over 3000 people, 1500 of which are costumed re-enactors.

Personally, I've never seen anything like it. At least not on this scale. There are scheduled events you can witness as they would have been like in 1775. My girlfriend and I watched a mock-trial, and caught a bit of a reenactment (essentially a play that occurs in and around the tourists in the streets), and took a few guided tours of old buildings. It's like Disneyland for colonial America history buffs.

While I enjoyed my tour and watching people walk around dressed in silly outfits say Old Tymey phrases, what I really enjoyed was talking to the craftsmen. Colonial Williamsburg has all of the shops and tradespeople you might expect a small Virginia town in 1775. There was a wigmaker (she was a bit looney if you ask me), a tailor, a brickmaker, a blacksmith, a gunsmith, a cooper, a carpenter, a cabinet maker and just about anything you could think of. And these craftsmen work away at their trade while they chat with tourists - in character of course.

I wondered what happened to the products that these craftspeople were making after they were done. Unlike in Disneyland where mechanical elves simulate hammering a nail over and over again until the gears in the machine break down, these people are actually working on what it looks like they're working on. And their labour actually goes towards projects to expand Colonial Williamsburg.

The cobbler informed us that the books he was making would be used by a new employee as part of his costume. All those barrels the cooper was shaping were being used as trashcans on the side of the road. The blacksmith informed us they had an order for 3000 nails to construct a new building in town, which he was making one by one - in between answering tourists questions. Whatever excess they produced found its way into the gift shops. 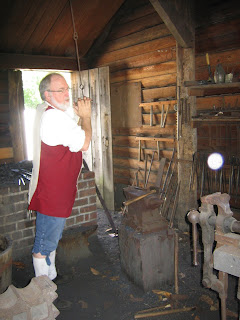 On the plantation just outside of town, we talked to a man making shingles from a log. He split the wood into boards with an axe, then used some medieval looking tool to split the boards into the proper shape. "Nobody else in the world makes shingles like this any more" he told us, adding "we get orders from museums all over the world looking for authentic style building materials. We asked him how long he'd been there. "9 years." We began asking the other craftsmen similar questions. It seemed like they'd all been there for quite a while. The cabinet maker had been there 25 years, and he wasn't even the senior cabinet maker. These people had devoted their careers to a particular craft, the way it had been done two hundred years ago.

Sure I know they're not really ghosts from the past, and I know the guy in the gunsmiths shop is probably tired to death of telling tourists "You can pick up that rifle, but please don't cock it." And I'm sure there are days when he would rather be drinking a beer and watching the game than answering dumb questions, but when it comes down to it, there isn't a book in the world that can tell you more about eighteenth century craftsmanship than any one of those senior craftsmen.

Sure the researchers found the right tools to put in the cabinet makers shop. And they found examples of eighteenth century cabinets for the tradesman to use as models. But after 25 years of using those tools and building from those patterns, that maker's expertise has far outstripped anything any academic has found in a book.

These are living, practicing experts. They may not have a background in academic history - most were tradesmen before joining the museum - and part of their duties is to act a roll in a grand play for tourists, the Colonial Williamsburg tradesmen show that you can in fact practice history. And you can do it well.
Posted by Adam Crymble at 5:29 PM