Taking Interactivity Into Your Own Hands: Touching in the Museum

"Him" is a rather large fellow who lived approximately 65 million years ago. In this case, the skeleton of a T-rex standing in the Smithsonian Museum of Natural History.

The young boy's father looks around coyly to check for security and quickly picks up his son. Excitedly, the boy reaches over the Plexiglas barrier and places his hand on the dinosaur's leg-bone. His eyes light up.

We learn by touching. Babies are the best evidence of this. They'll put things in their mouth that even the dog would turn its nose up at, just for the chance to learn a little bit about an object.

This boy, now about six years old, has graduated from licking things he wants to learn about and has moved on to touching them. And I can't say I blame the kid for his choice of object to touch. If he is anything like I was at 6 years old, he knows that the T-rex is the most scarriest, most meanest dinosaur ever, and it could chomp him in one bite. Who wouldn't want to touch him while he's in this less harmful, yet awe inspiring state?

It will be many years before he realizes that the leg he touched was made from a mold. Meanwhile, that experience he just had will remain the coolest, most precious thing he's ever touched - until he gets married, and not a day sooner.

After about a half-hour in the dinosaur exhibit, it became clear to me. People want to touch what they see in the museum. They want to connect with it in some way. The little boy and the dinosaur now have a relationship: they touched once. And if they ever meet at a cocktail party, at least they'll have something to discuss.

What is more, on the most fundamental level, the little boy turned what was a static display into an interactive experience. Sure, not too much happened to the casual observer, but for the little boy it was magic.

I saw evidence of this touching all over the Natural History Museum. 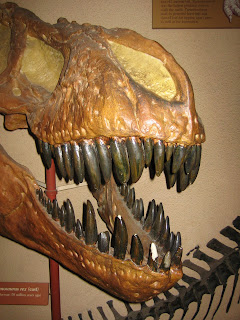 This object, prominently labeled "Cast" is situated so that the front few teeth on the bottom jaw are within arms reach of anyone over three feet tall. Even though it's not authentic, the teeth have either been created to show extreme plaque build up on these front teeth, or thousands of hands have brushed them over the years, wearing off the paint until only the white cast remained.

I stood and watched for less than a minute and nearly everyone passing this skull touched the teeth. Even the adults who were able to read the sign - or who knew better than to think the Museum would put a real T-Rex skull so carelessly close to visitor's hand - couldn't resist at least grazing the tips of the teeth with the palm of their hand.

Understandable. Dinosaurs are cool; they bring us back to our childhood when we read stories about them and were able to recite endless facts about them to any grown-up who would listen. Did you know that stegosaurus have spikes on their tails and that diplodocus is a plant eater?

However, that doesn't explain this: 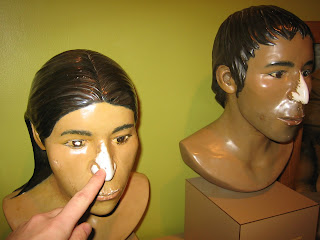 This poor couple in the Western Civilizations wing of the museum are in serious need of restoration.

These aren't artifacts, nor do they pretend to be. They don't have nearly the same 'wow' factor as the T-Rex. Nevertheless, thousands of fingers - mine included, have worn away the paint.

I'm inclined to suggest that this is a cry for help by the visitor. The museum has provided such a rich assortment of visual stimuli, that people take the first chance they get to change that up. They touch it.

It's a harmless action that fulfills that need for an interactive experience. It may sound silly, but I would rate my nose-touching experience among the most memorable of my day at the Smithsonian. If nothing else, it was a little bit naughty and it was a change from walking around with my hands neatly folded behind my back.

I must thank the Smithsonian for including these interactive, tactile exhibits. Though they weren't overly complex, they allowed me and everyone with a little boy still inside them to get some pent-up energy out. They gave my eyes a momentary rest, and let me contribute to the slow, meticulous destruction of objects in the museum with just a hint of oil from my fingers.

Oddly enough, there was no evidence of the same wear on text-panels. And nearly all of them were within touching range.
Posted by Adam Crymble at 9:11 PM