Spoils of an ongoing Afghanistan war, in a National Museum? 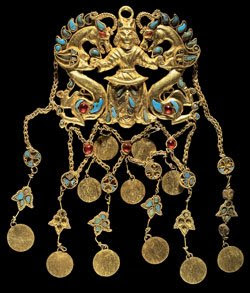 The National Gallery of Art in Washington DC is currently exhibiting "Hidden Treasures from the National Museum in Kabul." The collection on display was saved from the wrath of the Taliban by the Afghan curator and hidden for several years before being smuggled to Washington for this temporary exhibition.

The artifacts are beautiful, and the gallery has done an excellent job on the show, but something felt distasteful seeing these artifacts in the United States, especially while NATO troops are currently engaging combatants in Afghanistan.

To argue that the museum is neutral in this conflict is hard to swallow. The Smithsonian - of which the Gallery is a part, is an American national institution. The conflict in Afghanistan is everything that post 9/11 American culture stands for.

It is one thing for the Americans to help safeguard the collection during a time of danger, and entirely another to put it on display. If the tables were turned and the insurgents held the U.S. Constitution in a museum in Kabul, the American people would surely see the situation differently.

I applaud the National Gallery of Art for helping to preserve these priceless objects. But, let's not rub it in anyone's face. It wasn't Andrew W. Mellon who brought these objects here. It was bullets. Good intentioned bullets, perhaps. But bullets none-the-less.
Posted by Adam Crymble at 8:24 PM