I made a quick visualization of what the people of Canada are saying about the current coalition that seems imminent in Canadian federal politics. The visualization is made with Wordle, which is a snap to use.

The first is the frequency of word use amongst commenters to the article: "Tories launch anti-coalition ad blitz." This article was printed in the left leaning "Toronto Star" on December 2, 2008. There were 264 comments in total. 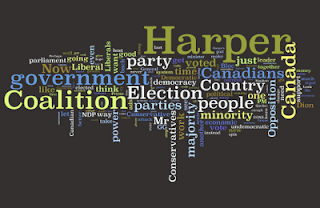 This second one is the word frequency of commenters on the National Post article, "Dion mortgages federalist ideals to sign on with separatists." The National Post tends to lean to the right on political issues. There were 64 comments to this article. 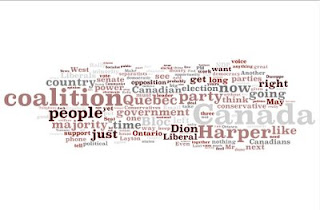 Both articles essentially say the same thing, but with opposite perspectives on what makes good politics.

It's interesting to note the slight differences in the two. In the first article, Prime Minister Stephen Harper is the clear focus, whereas his name is noticeably smaller in the pro-Harper National Post article.

Likewise, "Quebec" is fairly prominent in the National Post article, which suggests commenters frequently pointed to the fact that this Liberal led coalition will involve the separatist party, the Bloc Quebecois. To the right, this is akin to a deal with the devil. In The Star, "Quebec" is barely visible - you can squint to see it next to "People."

There are plenty of other assumptions you could make about the contents of these comments and the worries of both sides based on the visualizations, some of which might even be true. And, I know it's not really history, but one day it will be.
Posted by Adam Crymble at 6:08 PM

Very interesting, Adam, and a nice example of how this kind of data can be visualized.

Visually tainted programs would bring all those prospects for the individuals to proceed further with what they must have to look forward. rewrite service

This blog post provide so many informative things about content paraphrase and also very
good site. But one of the most important thing is grammar.

The world is now advanced due to different changing and the evolution. You can now do every task of your life with easiness and with a good approach. For this purpose there is resume rewrite service which defines the proper definition of development and modification.

The planet has become sophisticated because of various altering and also the development. Now you can perform each and every job in your life along with easiness with a great strategy. For this website function there's cv edit support that identifies the correct description associated with improvement as well as customization.

Good to know your writing.

They just take words within This guide and replace these words of a comparable significance, without actually Assessing the guide or altering paragraph structures. here are some writing tips for you.

Hello, my friend! Of course, it is possible to paraphrase everything now, not even writing it on your own. Even using the paraphrase machine which is totally free, you could get some very normal and grammatically correct content. But if you want something out of this world, use the service that knows how to paraphrase and not plagiarize uk. All of the modern technologies are trying to meet the target of the modern students and pupils. You will like our one. Because it is brilliant and you do not have to do anything except for clicking the mouse on your computer.