I've started using Twitter to keep up with the wide world of Digital Humanities research which prefers to disseminate itself in 140 character messages 500 times a day, rather than wait 8 months to publish now out of date material in a journal. And whilst Twittering I noticed that one of my followers was also following Federal NDP leader Jack Layton.
I began to wonder how politicians are using Twitter, and how effective it is or how effective they are at using it, so I added the five national party leaders to my list. I've discovered two things. First, most don't Twitter very often or very effectively. At best it's a brief propaganda message once or twice a week preaching to the converted, with very little dialogue to be seen. In fact, one party leader doesn't even pretend they care to engage in a dialogue and doesn't follow his followers.
The second thing I noticed was that the number of followers each leader had did not necessarily represent the percentage of seats that their party received in the last election (Oct 08). 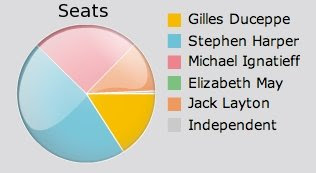 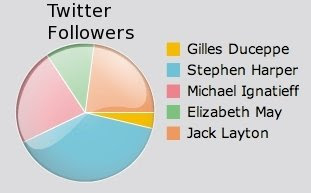 If we attempt to infer meaning from this, we might be tempted to suggest that Elizabeth May's "Green Party" supporters are overrepresented amongst Social Networkers. Perhaps they are young, and they are more likely to be comfortable with a computer.

We might also ponder, Jack Layton's NDP Party has almost twice as many Twitter followers as seats. Maybe the old adage that the NDP has trouble getting the vote out, or that its supporters vote for Ignatieff's Liberal party in an attempt to thwart the Harper's Conservative party is true?

Lastly, it looks like Gille Duceppe's "Bloc Quebecois", the separatist party either isn't in to Twittering (perhaps a language / culture issue), or he's lost a lot of support since October. I'd bet on the former.

However, when we make the same comparison by looking at the popular vote, rather than the number of seats in parliament, an entirely different situation arises. 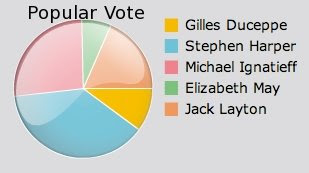 Now, the only presumption that looks like it was correct is the one about Gilles Duceppe's lack of Twitter support being a cultural issue. The Green Party and NDP (Green & Orange) are much more closely preportional between Twitter followers and Voters.

In fact, with the exception of Gilles Duceppe's Bloc Quebecois, the number of Twitter followers accurately reflects the percentage of the popular vote that a party received in the last election, within 5 percentage points.

What does this mean? Keep in mind that almost 6 months have passed since the election (including a ridiculous power struggle that went no where back in January), so support levels will have changed a little. But I think this proves A) Pie Charts are fun to make. B) You don't need to spend hundreds of thousands of dollars on researching voter intentions. C) Make sure your data sets reflect reality. In this case, the "Seats" graph gives a skewed view of what really happened.

If you'd like to make lovely pie charts like those in this post, you can do so for free at MrNussbaum.com
Posted by Adam Crymble at 10:06 AM