Vandals on the Tube: the Mythbusters? 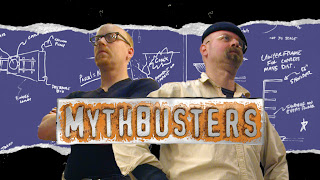 I was watching the television program Mythbusters last night, in which a group of engineers go about testing urban myths to see if they are true. They’ve tested everything from the myth of the exploding, killer lava lamp to the validity of the “five second rule.”

Last night, they sought to show if there was any truth to the myth that two hammers, if hit together, could shatter. They had tried to disprove this myth once before using modern hammers that they superheated to make them more brittle, but fans of the show insisted they had gone about the experiment incorrectly. According to these fans, only antique hammers would shatter in this fashion.

So, being engineers, keen to teach the world about torques and forces, the hosts of the show went out and bought two antique, pre-WWII hammers, attached them to a robotic arm and smashed them together with twice the force that a human could swing. The experiment was a bust. The hammer heads cracked, but would not shatter in an explosive manner as viewers had suggested they would.

Then it struck me, is this not vandalism? Are we going to let a bunch of engineers destroy artifacts like that? Those hammers will never again be produced. What if that had been the last hammer of its kind? Now it’s gone, and for what? To be part of some silly science show to entertain viewers?

Before you think I’m a nut, let me say, I ca 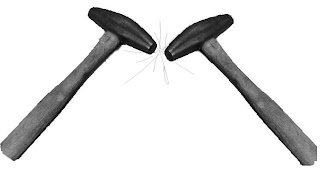 lmed down and took back all the nasty thoughts I had about engineers. I know it’s unfeasible for us to keep everything just so that we will have a record of who we were. The world does not exist so that historians can write about it thirty years later. And after all, perhaps the use the Mythbusters put that hammer toward will tell historians of the future far more about our society than the hammer did about the people who made it eighty years ago.

Thanks to the Mythbusters, we’ve traded one record for another: a hammer for a video clip of humans being curious. So, maybe as historians it’s not our job to worry about what to preserve, but to deal with what is preserved? That way we can focus on our writing, and leave the preservation to the archivists and little old ladies with too many strawberries. It’ll be less stressful that way.