I was in this past summer at the Musée D’Orsay, the gallery holding French art from 1848 to 1914. I have to admit, I know absolutely nothing of this period in art history. So my

girlfriend and I shelled out the €6 each for an audio guide. The guide was pretty well done and gave between two and four minute descriptions of most major pieces in the gallery, detailing who the artist was, why he or she produced the work and how it was received by the public.

Sure, it was interesting to learn about the various pieces of art, however it would have taken a year to listen to every single recording and my feet got tired far before we reached that end. Even if I had listened to every recording, I still feel I would have had only a rudimentary understanding of nineteenth century French art. Nevertheless, we listened to quite a few of the descriptions, and still, I left only knowing 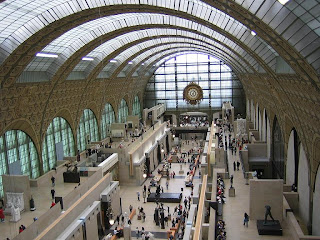 tiny fragments of the bigger picture. One fragment about impressionism, one about sculptures depicting Napoleon, one about Gauguin, but nothing to weave it together. I almost wished I could have taken a class or two in the museum that would have helped me make sense of what I was seeing.

And really, that’s not a huge stretch for the museum. After all, they’ve already got thousands of functional audio guides. So why not introduce a themed audio tour? Then, instead of a fragment about impressionism, I could have listened to a twenty minute guided lecture of impressionism. Isn’t that exactly what every art history lecturer dreams of? Being able to lecture students in front of the masterpieces themselves? I would have taken away so much more than I did from my fragmentary experience, and still more than I could have hoped by sitting in a lecture hall.

For those who don’t want to take the guided tours, they could still listen to the individual recordings – they’re already on the audio guides and there’s no reason that needs to change.

All such a project requires for Musée D’Orsay is someone to write some lectures that tie together the various works, someone to translate them into the half-dozen languages supported by the audio guides of the museum, and someone to record the dialogue. For a one-time cost, the Musée D’Orsay could provide an extra dimension to the understanding their visitors come to of the collection, without the need to hope you could find a guided tour in your language, speaking about a specific topic you’re interested in, that happened to be started at the moment you arrived.

It's a couple of years old now, but you might find Art Mobs interesting. It's a project that aimed to, "hack the gallery experience," by encouraging people to make their own audio tours and to offer them for others to download.

thanks for posting that. Definitely cool what they're doing there.